Have you ever had an insurance claim? What was your experience like? I truly believe that claim time is the true test of an insurance policy- it’s then that you actually “see” your policy go to work for you.

I’ve seen lots of interesting claims, but a recent one absolutely blew me away. Not because of what happened (high winds knocked a large tree branch on a home), but because of how we received notice of the claim and how it subsequently unfolded. Take note, as I think this is pretty ground-breaking and something most insurance companies can’t even comprehend yet. I can still barely absorb how it happened. 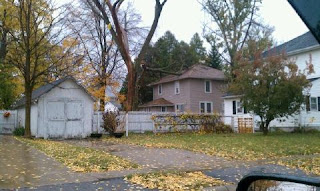 The day it happened, I was sitting at my desk at Alan Galvez Insurance and just happened to glance at my Twitter feed (I always have Facebook and Twitter open as communication sources). I saw one of our customers, Tera, had just posted the following- “Well, it finally happened. That old tree hit our house.” The next post was from her husband Jon telling her to give me a call. I responded via Twitter asking Tera the extent of the damage and also telling Jon (he was at work), that I was on the claim immediately. Tera also tweeted me a photo (at right) so I could see the damage- the branch had gone through the roof and rain was coming into the house, You can see our conversation by going to my feed, and starting 10/26, looking for tweets between me and @Teradawn.

Amazingly enough, a contractor friend (and the insured’s neighbor), was at his wife’s store next door to my office. I ran over and said “Allen, I need your help.” I told him the situation and asked him to please make temporary repairs as well as provide an estimate for permanent repairs. Within 15 minutes he was at the insured’s house. If you’re local and need some remodeling/contracting work, I highly recommend Allen Snyder of Snyder Home Repair. He does excellent work, is reasonable and very trustworthy. You can reach him at 937-592-4699.

I also called a tree removal service that had done work for us in the past. Within an hour, they arrived and made plans to get the branch off the house (it was ultimately determined that a crane would have to be rented and removal would occur the next day).

As I was making arrangements for these various services, I kept Tera in the loop, again via Twitter. I told her who was coming, their names and what was going to happen next. Within 24 hours the tree was off the house and Allen was busy fixing the exterior and interior damage. Tera and I communicated back and forth as to what else she needed to do to facilitate the claim (submitting estimates, etc.) It’s now a week later, and they are well on their way to having their house good as new.

In all fairness, it was just dumb luck that I happened to look at my screen and see the post right after it happened. And having the contractor next door was some serious luck. However, I don’t think it changes two valuable lessons I learned from this experience:

What do you think about this crazy turn of events? Are there other lessons that consumers or those in insurance can take away from this experience? This was a first for me and I’m interested to hear your reactions. I think this is just the beginning folks………

Subscribe to get Article Updates delivered directly to your inbox

Subscribe to get Article Updates delivered directly to your inbox